"A beast-like Stand that can howl to create powerful, far-reaching shockwaves, in addition to attacking with its fangs and claws. Well-balanced in all areas, its power is backed up by impressive speed, giving it the potential to wreak instant devastation." (In-Game Description)

"On the surface, you're cool-headed, indifferent, and alert. However, deep down, you're filled with curiosity and love spending time with family and friends more than anything else. Though you're wary of new people and situations, you're thick-skinned and composed, never one to sweat the small stuff. You feel that protecting your family is your duty in life." (Personality Evaluation)

In addition to these stats, the Stand itself gives an additional bonus of Power +1, Durability +1, and Speed +2.

Howlin' Wolf is by far the most well-rounded Stand and is ideal for beginners. Its jack-of-all-trades nature means it doesn't particularly excel in any area, but its sturdiness combined with its strong Wind attacks that inflict BlowBack means not much strategy is necessary to get the most out of it.

The recommended tactic for Howlin' Wolf is Flee. It fights almost exclusively with Spirit-based attacks, which aren't weakened by this tactic, and gets a nice bonus to speed.

Howlin' Wolf's normal attack is physical, both short and mid-range, hits one enemy, has a basic hit rate of 80%, has a critical rate of 10%, and has a 5% chance of inflicting BlowBack.

1 These moves can be learned randomly by staying in the hotel with Iggy when his FP is high enough (i.e. he can be given orders in battle)

In short, a "social analyst". The user is someone who is cautious and calm like a wolf, but has friendliness akin to a dog when it comes to their family, which resulted in this Stand to be formed. Their image is similar to a watchdog with a strong presence. 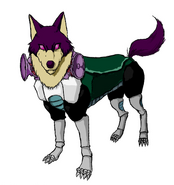