Today I'm going to kill you with my stand, Jotaro Kujo!Kakyoin's handkerchief message to Jotaro

Noriaki Kakyoin is the first major boss to be encountered in the game, and the fourth party member to join the group.

A Japanese student hired by DIO, Kakyoin is the first assassin commanded by him to fight the Joestars. In order to do so, he assaults both you and Jotaro inside of your school in Japan, possessing a nurse with his Long Range/Control stand "Hierophant Green".

It's after this battle that you join the Joestar Group. Marking the first step in your journey with them.

After being defeated and having his (DIO's) flesh bud removed, Kakyoin also becomes a major ally of the Joestars.

Notably, he is one of two characters (along with Jean Pierre Polnareff) who can join the player when they have high enough FP with him during certain Betrayal endings 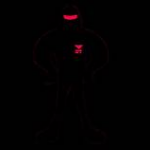