"Clothed in red armor, this warrior Stand uses its fists as a weapon. Its punches can knock people silly, incapacitating them temporarily. Its incredible offensive power is offset by disappointingly low accuracy… However, in terms of sheer strength, few Stands can match it." (In-Game Description)

"Taciturn, intimidating, and unshakeable. You take a methodical approach to problems, never rush things, and seldom show cracks in your calm veneer. You appreciate the simple things in life and have a lot of self-control, but you're a loner by nature as you feel most at peace when on your own." (Personality Evaluation)

In addition to these base stats, the Stand itself gives a bonus of Power +2, Durability +1, and Speed +1.

With a base Power stat of 245 at level 50, this Stand is the strongest out of any party member's, surpassing even Star Platinum's 232. To balance this, Red Garland has comparatively low accuracy, speed, and defense, as well as much fewer (M) and (L) attacks to balance out its moveset. This makes its usefulness very situational.

The recommended Tactics for Red Garland is "Fight Normally". Red Garland's low Durability means that the boost to Attack isn't worth the debuffs.

Red Garland's normal attack is physical, short-range, has a basic hit rate of 80%, has a critical rate of 15%, and has a 15% chance of inflicting Berserk, Confuse, or Fear.

In short, a "silent powerhouse". A Stand modeled after Jotaro, a typical short-range power type. Since the user's nature is to "psychologically shake their opponent", the Stand was made based on this characteristic. And it simply gets stronger and stronger. 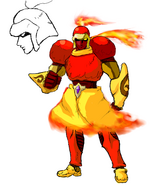 Sketch of Red Garland by Clayman
Community content is available under CC-BY-SA unless otherwise noted.
Advertisement