"A humanoid, axe-wielding Stand that resembles a certain famous killer. By chopping things with its axe, it can cause them to gradually rot. Physically speaking, its strength is nothing to write home about, but its axe can phase through objects and slice cleanly through anything regardless of hardness." (In-Game Description)

"A cheerful, talkative person with a great sense of humor. Though merry on the surface, you can also be quite the worrywart. Very honest, but you don't allow anyone to see your insecure side. Spontaneous and impulsive, you'll try anything once. You drive people up the wall at times, but they adore you nonetheless." (Personality Evaluation)

In addition to these base stats, the Stand itself gives a bonus of Power +1, Durability +2, and Spirit +1.

The Joykiller is the fastest playable Stand in the game, and excels at sweeping through close-range enemies with powerful attacks, especially in the early game. Its effectiveness falls off later, due to more enemies and bosses staying out of S range, but its proficiency at spreading Poison around and access to M range skills like Chainsaw let it keep up with the competition.

Despite its in game ability description, its attacks will still follow regular damage reductions from physical defense.

The recommended tactics for this Stand is "Desperation Attack" to maximize power - the Stand's Speed is more than enough to make up for the Durability debuff, which is low as it is.

The Joykiller's normal attack is short-range, hits all enemies, has a basic hit rate of 90%, and has a 55% chance of inflicting Poison and Corrode.

In short, a "bad friend that you cannot hate". At first glance, they seem cheerful, but they have an unstable darkness in their heart, the image of which can be likened to a certain murderer. They also have a poisonous tongue, which is why their name has the character for "poison" in it. 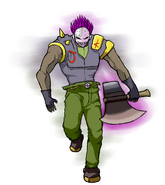 Colored art of The Joykiller by Clayman

Sketch of The Joykiller by Clayman
Community content is available under CC-BY-SA unless otherwise noted.
Advertisement